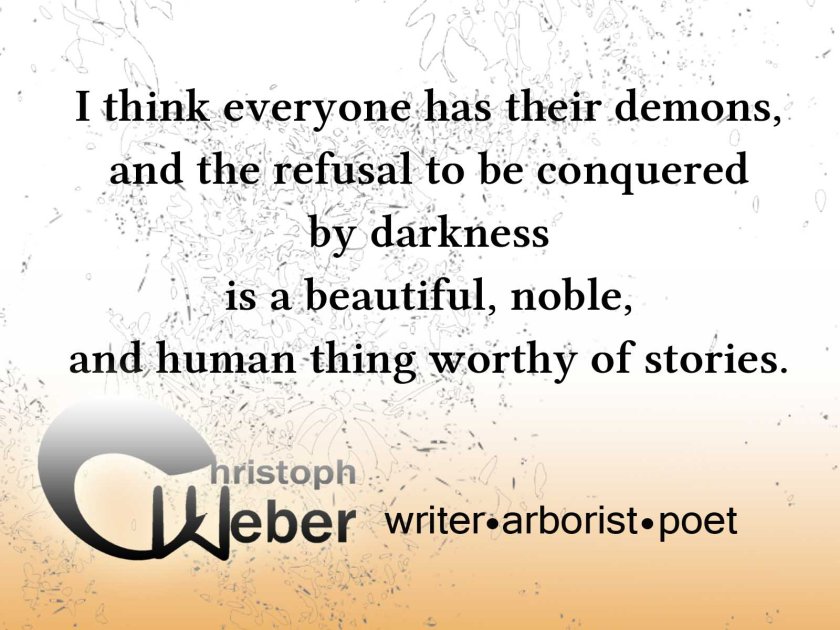 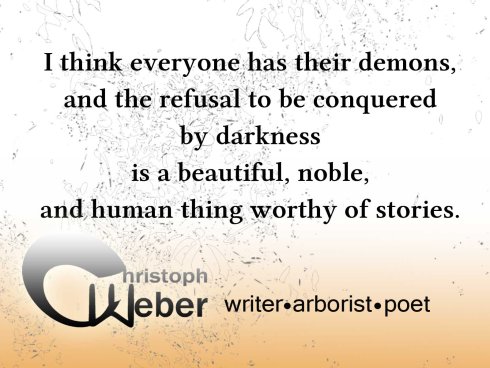 Christoph Weber, a new writer in the science fiction and fantasy genre, kicked off my sci-fi/fantasy feature this May over at InBetweener.

I chose this quote to share with you because it resonated with me, and I know that many of us bloggers have been fighting the same darkness in the form of depression, chronic illnesses and fear caused by this uncertain and bewildering period that we’re currently facing.

You can read my interview with Christoph Weber here.

And if you need a laugh, you can see what happened when Arnold answered Christoph’s phone for him over on his blog here or here.

Not this Arnold, the other one!

As part of the Introduction to Screenwriting Course  that I’m doing (one of the reasons I fell off the face of the earth this week), we were asked to work on a character from a movie or of our own making.

As my project, I’ve worked on Rob Hart, the hero of my novel Settle Down Now.
He’s been a bit problematic, you see. Most readers of Settle Down Now dislike him intensely and don’t think he’s worth Charmaine’s time.

So I’d like to know what you think from my assignment. Does Rob Hart sound like a hero to you?

I  had to quickly jot down his major actions, then deduce his needs and wants, then describe his character.

Defeats pirates to save Charmaine and The Sunflower.
Confesses to Charmaine that he loves, but doesn’t act on it.
Confronts Charmaine about past, scaring her.
Risks life to chop away fallen mast to save Charmaine and The Sunflower.
Constantly makes snarky, insulting remarks to Charmaine to convince himself he hates her, and ensure that she dislikes him.
Threatens to sabotage the show, but never does.
Carries Steve’s package, even though he’s not so sure it’s a good idea.
Accepts the show’s offer despite it meaning he’ll have to deal with Charmaine in his life again, telling himself it’s for The Sunflower’s good.
Remembers Charmaine and the pain.
Takes Steve’s advice and contacts the shows producers to offer The Sunflower as transport/venue for the show.
Takes measures to ensure he forgets Charmaine.
Falls in love with Charmaine in Scotland despite himself.

So, is it thumbs up for Rob, or a rotten tomato?

My apologies for not being around the blogosphere much recently. I’m doing two free courses concurrently with FutureLearn. Together with the revision on a novel of mine, time’s been flying by. I can’t believe we’re already almost a third of the way through Feb. And with Valentine’s Day knocking on the door already! So I’ve decided to share the 500 word or so love-themed story I wrote for class.

Be warned. There’s some Karaoke 🙂 I’ve links to the songs further down in case you aren’t familiar with them. Enjoy!

Sweat glistened on Julian’s face.“Sing!” Lex had insisted, pushing him up onto the stage and shoving a mic into his lax hands. Curious faces looked up at him. Melinda nodded gentle encouragement. Reaching her, Lex smiled a crooked smile, his hand hovering closer to her shoulders.

The selection of songs scrolled leisurely across the screen without a care in the world. Lex smirked, his hand on Melinda’s bare shoulder. Melinda frowned a little at Lex, but didn’t move away. She turned back to Julian with another encouraging nod.

Snickers and whispers grew in volume. Others were awaiting their Karaoke moment.
Desperately, Julian looked at the scrolling selection—something with few lyrics and more music. Or something which sounded fine no matter how badly you sang it.

Definitely not Mariah Carey then, or Wham, or…

Someone from the floor yelled something indistinct. The tone said it all–patience was running out.

And there it was, Uncle Harold’s favourite song! Julian selected it. He even knew most of the lyrics! And those he didn’t know he could just mumble.

Julian shut his eyes, imagining he was back in Uncle Harold’s garage. “Born in the USA!” roared Julian.

Shocked into silence, the audience stared at the tall, bony man; his face contorting with the words like a Scream mask.

As so often happened when Julian was around, shock and horror turned into gentle amusement. People started clapping time and stamping their feet.
Julian didn’t open his eyes until the end. Then he staggered off the stage.

Melinda met him with a glass of something cool and a large smile. Lex hovered behind her.

“That was very brave of you! Well done, Jules–” began Melinda.

“Yeah, well done. Could’ve picked a better song, my man.” Lex thumped him hard enough on the shoulder, sending him an involuntary step back. “That one was kind of lame.”

“Oh, come on, Lex,” grinned Melinda. “It was fun! It’s my Uncle Steve’s favourite. Especially at weddings…though I don’t know why!”

Julian smiled in relief and wonder. “I know! It’s the same with my Uncle Harold!”

“No, you lie!” Melinda looked delighted.

“No, you lie!” mimicked Lex as Melinda took Julian’s arm and led him to their table, talking a mile a minute.

Lex would not be out-done. He never was. Plan B’s time had come. Brushing past a matron, he snatched up the mic and scanned the selection. What would impress Melinda the most, and blow Julian out of the water? So, she liked American Rock, huh? Here it was — Dire Straits; just the thing to leave Julian in.

Lex looked over to Julian and Melinda. They were talking and laughing.

He refreshed his memory of the lyrics as he sang, then looked back to his targets, singing, “Love Me Tender.”

For the music videos, see below. Graphic by Pixabay.com

Born in the USA by Bruce Springsteen

It’s been a crazy month. It’s just zooming by, hardly giving me a chance to catch my breath or think–you know, proper thought-time.

So my apologies for not posting more, especially reviews, or for my not commenting much on your posts, but time is…out of my control for now.

So while I catch my breath, and shake my head mournfully over the pile of work I’ve still got to get through this month, here’s some of my stuff to keep you company.

For those of you who have a class or presentation coming up, you might find this interesting: http://www.freepik.com/blog/free-graphic-resources-for-teachers/

And if you’ve wondered what kinds of papers are delivered by Mad Scientists, or maybe you’ve been thinking of taking trips to Mars or Jupiter, you’ll want to check this out: http://madscientistjournal.org/2016/01/on-conveying-private-material-and-persons-in-the-solar-system/

And don’t forget this week’s PiniMe. It will be out in a couple of hours:)

Thanks for catching up with me. See you later:)